Shifting the e-Discovery Paradigm from Documents to People

Shifting the e-Discovery Paradigm from Documents to People

TV defense attorney Ben Matlock is one of the most well-known fictional characters in American pop culture.  A folksy, bad-tempered southern attorney, he has a penchant for calling out perpetrators in a dramatic courtroom scene. While it has been over 20 years since the final Matlock episode aired, the essence of his investigation style still holds true: Understanding people and their behavior acutely helps investigators unearth the truth.

Of course, life was much simpler in Matlock’s era. Families across the United States were just starting to open their mailboxes and find AOL discs offering free trials to “get America online,” and memos were still the de facto method of business communication.

Today, of course, the ways people correspond have changed—even beyond email.

Digital Communication in the 21st Century

Conversations in the digital world are complex. Texting and short message platforms like Skype and mobile are almost ubiquitously used, with over 8 trillion text messages sent every year worldwide. Collaboration and productivity tools like Slack are also taking off. Of the Fortune 100, nearly 50 percent use Slack—and users are active on the platform for an average of 320 minutes a week.

Plus, messages don’t happen in a vacuum. They can quickly shift from one platform to another, making it difficult to follow the thread of the conversation.

In e-discovery, the increasing volume and variety of data has dominated much of the conversation around innovation. Platforms like Relativity have been evolved and hardened to handle the ever-growing pile of data generated by individuals in the modern world.

As a result, every part of the EDRM continues to get faster and easier. Sophisticated data analytics and artificial intelligence (AI) capabilities have also emerged to uncover key patterns and topics.

All of these have proven to be valuable and important innovation, but they remain mostly centered on examining hard data.

The fact is that it’s not the data being dishonest, behaving badly, or committing crimes. It’s people.

Lead investigators in a case follow the actions of the people involved, but are only able to examine the paper trail they left behind. e-Discovery technology has been built and perfected for the latter but not the former, creating a disconnect between the technology and how investigators perform their jobs.

A major goal of our latest RelativityOne releases has been closing this gap, helping our customers to follow the people in their case—not just the data.

In the real world, an investigator can follow a suspect around to gather intel on their interests and behaviors. But in the digital world no single identity exists.

That’s because most people have multiple email addresses, both personal and professional. Those email addresses show up in many different formats across email clients and devices. As a result, following a person around an e-discovery data set can be a huge challenge.

We knew we needed to tackle this. Name normalization addresses this problem by automatically combing through the system to condense all of an individual’s email addresses and name formats (e.g., John Doe, Johnny Doe, and J. Doe) into a single identity known as an “entity” in the platform.

You can add additional attributes like company, role, department, expertise, and any other relevant information. Every detail you add enriches your data, giving you a clearer picture of who John is.

The best part is that these entities can be carried over from case to case, so the insight you gathered about John Doe in one case can jump-start another. In our example, it looks like John Doe has been popping up in discrimination claims across a couple parts of the organization—better dig into that.

Better Understanding the People in Your Matter

With a single view on individuals across matters established, we focused on highlighting the communication networks surrounding each person. Enter communication analysis.  With it you can visually explore interactions and connections between entities to easily see who’s been talking to whom, how often, when, and what about. You can zoom in on a given individual and learn everything about their involvement in the data set. For example, how many emails have they sent and received? What other actors have they been talking to?

Previously, during an investigation on fraud, you may have followed a trail of key terms and concepts and reviewed a lot of false positives before finding a document pointing to a suspicious relationship between two seemingly unrelated custodians. With communication analysis, you can understand how key concepts intersect with interactions between people.

That means you can narrow in on conversations about fraud to immediately reveal a suspicious amount of communication between two individuals—a key relationship that could then lead you directly to the heart of the matter. 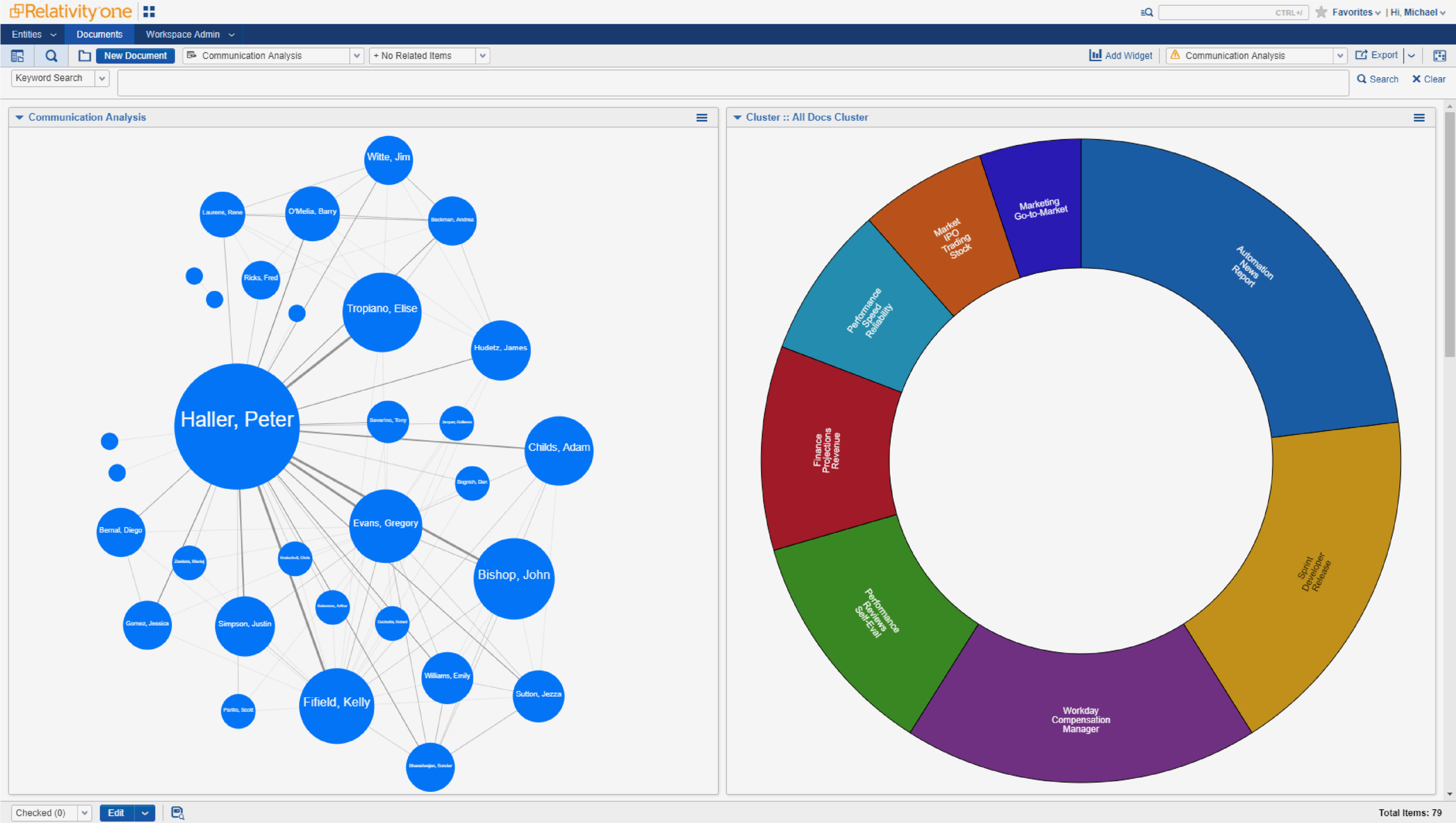 Lastly, we’ve made it easier to follow the way people communicate in real life with an intuitive interface for reviewing conversations conducted via text, instant messaging, and collaboration tools. Whether it’s text and app conversations or public posts and private direct messages, you can flip through short messages the way you would in the native application seeing emojis, images, reactions, comments, likes, and more.

All in a single scroll, you can follow conversations across channels, home in on the people involved, and get additional context like edits, deletes, and even jump to a different time period. In today’s multi-channel world, seeing a conversation the way the sender and recipient did is crucial to understanding the full story. 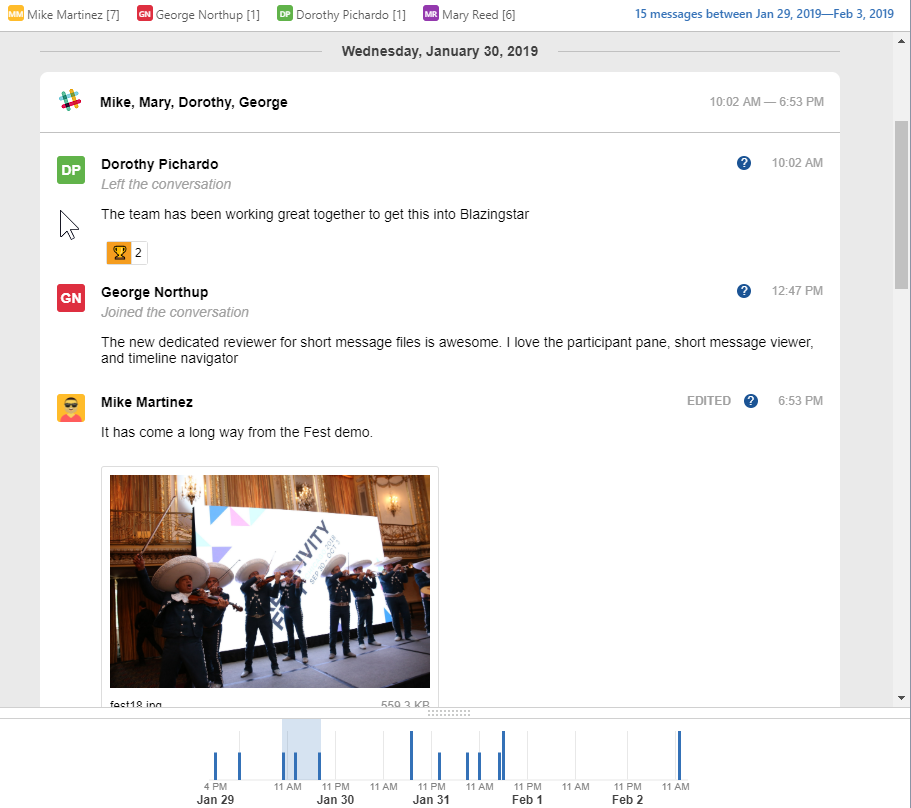 Get to the Beating Heart of Your Case

Legal teams have spent years managing the emergence and explosive growth of electronically stored information, and that time has been well spent. Quickly gleaning insights from your data is what will crack your case and secure a win in the courtroom.

Still, the data tells only part of the story. Centering your investigation around the people in your matter reveals key interactions and relationships that you can focus on from the get-go, painting a complete picture from the start. This will uncover deeper insights, more accurate timelines, and even more insightful motivations than any paper trail could on its own.

We’re excited to see our community dig deeper into the human element of their work moving forward, and we can’t wait to see how it changes the conversation on e-discovery.

This article was originally posted on relativity.com and is shared here with full permission from the author.