When you are in a long trial, it is helpful to make arrangements for daily transcripts so that you can refer back to what was said by a witness, the court, or your opponent in a prior day.  In a trial of any length, you will want to have access to prior deposition transcripts and prior hearings.  Court reporters typically provide those transcripts in several forms — paper, ASCII, and .ptx format.  You can (and probably should) have paper transcripts with you in the court in a box just in case you need to show something in paper format to the judge, but I find it helpful to have an electronic version of the transcripts on an iPad.  This makes it easy to search the transcripts to find what was said, plus makes it easy to highlight important things in the transcript.  And when you need to argue to the judge, you can easily take your iPad up to the bench during a sidebar and read from the relevant portion of the transcript.  Here are the tools that I find useful for doing this.

I find it most useful to start with the .ptx format and then create a PDF file.  The .ptx format, called the E-Transcript format, was created by RealLegal, which was acquired by LiveNote and is now owned by Thompson West.  Unfortunately, you need a PC to work with these files; there has not been an E-Transcript viewer on the Mac since before Mac OS X.  I open the .ptx file on a PC and “Print” the full-page version of the transcript, but instead of printing to a printer, I print to a PDF file.  There are many programs that let you do this on a PC.  For example, the full version of Adobe Acrobat can print to PDF, as can other software such as PDF Converter from Nuance.  As an alternative, you can make arrangements for the court reporter to give you a PDF version, but make sure it is a searchable version (not just a scan of the transcript pages).

You also want to make sure your PDF is a full-page version, which you can create using the software I described above, or if you are getting your PDF file directly from the court reporter you can request that.  Miniature transcripts, with four transcript pages on each side of each page, are nice to reduce the amount of paper you have to carry when you are working with paper transcripts, but when you are dealing with an electronic file on your iPad you won’t care how long the document is — your iPad doesn’t weigh more or take up more space in your briefcase when your documents are longer — and it is more flexible to have full-page transcripts for when you want to highlight.

Now that you have a searchable, full-page PDF file of the transcript, you’ll want to get that transcript on your iPad.  My favorite tool for viewing and annotating PDF files is GoodReader, the best $5 an attorney can spend on an iPad app.  The easiest way to get the transcripts to GoodReader on your iPad is to use DropBox, a free service that allows you to create a folder on your computer, and any file you put in the DropBox is synced to a private space in the cloud.  You can set GoodReader to sync with your DropBox folders.  Thus, you can create a folder called “Smith v Jones Transcripts” in your DropBox, drag your searchable, full-page PDF files into that folder, and then in seconds the file will be in your DropBox.  In the GoodReader app, you can tap the sync button to quickly download all new files from your DropBox to the iPad.  I know that some attorneys have concerns about storing confidential documents in DropBox because of the (very slight) risk of third-party access, but transcripts are public documents anyway (unless it is under seal), so DropBox should be fine for virtually all transcripts.

With the transcripts on your iPad, you can easily read through the transcript, page by page.  To maximize the size of the transcript on your screen, tap once in the middle of the screen to bring up the toolbars and then tap the button at the bottom middle of the screen.  You can then use the standard iPad pinch-to-zoom to make the document just a little larger, cutting off the space around the box on each page.  It is a minor change, but I find that the slightly larger text is even easier to read in court. 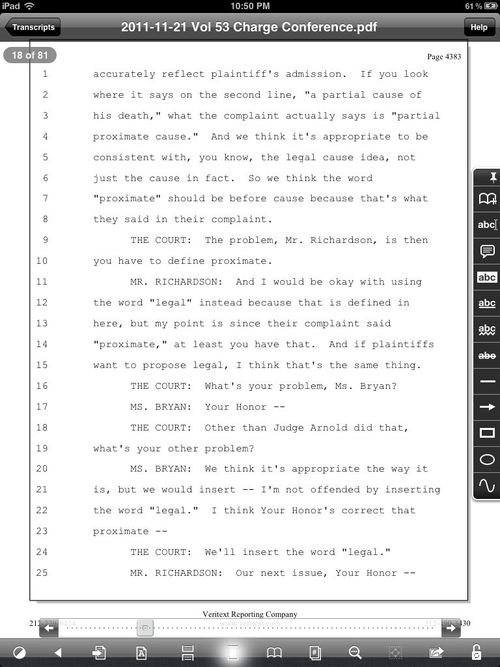 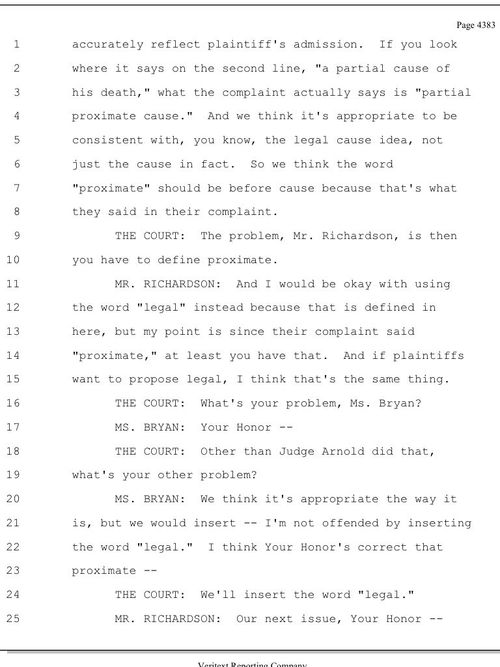 As you read through your transcript and find something important, you can highlight the text just by holding your finger on a word for a second and then expanding the selection. 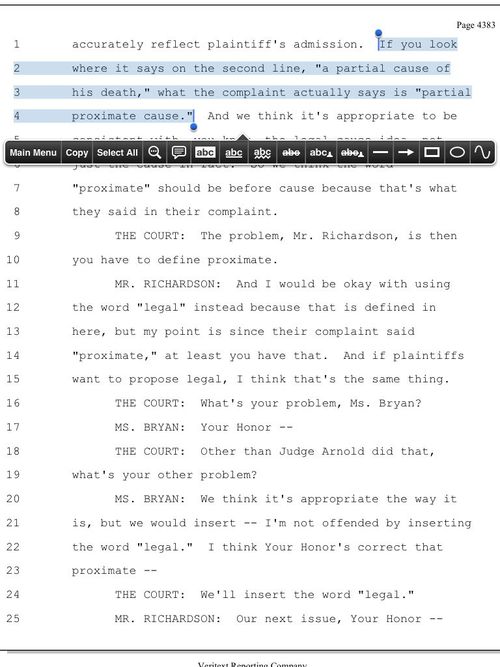 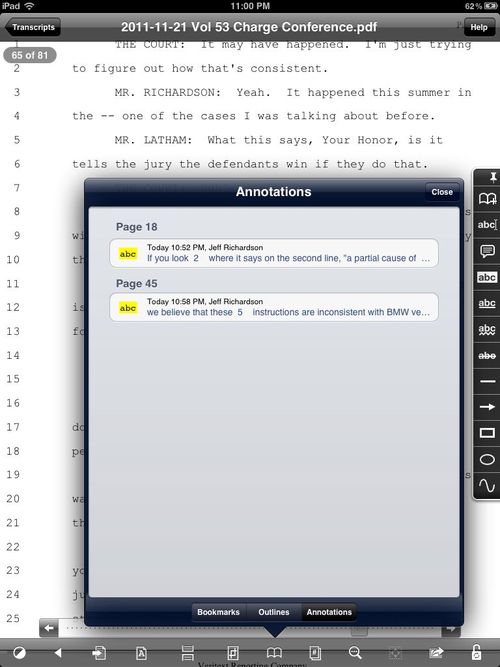 And of course, it is often incredibly useful to search the transcript to see when something was said in the past and exactly what was said.  GoodReader does a good job of searching transcripts and allowing you to jump through every hit on your search terms.  Keep in mind that you often will not remember exactly when something was said in trial.  Thus, in addition to having every individual trial transcript on my iPad, every night in trial I have someone simply combine all of the PDFs to date into one big file and I drop that into the DropBox folder, too.  This makes it easy to search through an entire trial.  I do the same with prior depositions so that I can quickly search through them during a trial.

Note that the search feature in GoodReader is simple, and doesn’t include features such as word 1 within a certain number of words of word 2.  Having said that, I’ve always found that the simple searches work fine.  Also, keep in mind that it is best if you can just search for one word because in a transcript if one word is at the end of a line and the next word is at the start of the next line, the transcript will read the line number at the start of the next line as information between the words, so a search for the phrase won’t always work.

Obviously, you can do much of what I am describing using a laptop computer instead of an iPad.  But as I’ve mentioned in the past, there are lots of things you can do with an iPad that you can’t do with a laptop.  An iPad battery will last all day; a laptop lasts just a few hours unless you plug it in, and plugs can be limited in a courtroom.  You can take the iPad with you when you speak from a podium or at a sidebar; that is awkward to do with a computer.  When the iPad is with you during your argument, if your opponent claims that witness X said Y a few days ago, you can quickly do a search and find exactly what witness X really said.

There are countless reasons that an iPad can be useful in trial, but even if the iPad just did this one thing — provide excellent access to trial transcripts and deposition transcripts — that would be reason enough to use an iPad in trial.  I’ve previously mentioned using an iPad to do legal research with WestlawNext during trial, and in the future I’ll provide more tips on making the most of your iPad in trial.

Jeff Richardson is an attorney in the New Orleans office of Adams and Reese LLP.  He practices in the areas of complex litigation and appellate litigation.  Jeff publishes iPhone J.D., the oldest and largest website for attorneys who use the iPhone and iPad.